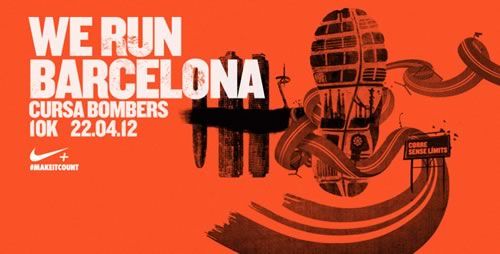 The "Cursa Bombers" 10 km race belongs to one of the most popular 10k competitions in Barcelona and in Spain. "Bombers" means firemen and every year several hundred take part in this race, some of them fully equiped, in a seperated competition from all over Spain.

Barcelona Cursa Bombers 10k "firemen’s run" is organized by Nike Running and the city of Barcelona. Online registration is possible on the website until maximum number is reached. This is a very popular run in all Spain and normally it takes about a week to reach the maximum number of around 20.000 registrations. Usually around 400 firefighters from Catalonia, Andorra and other parts of Spain take part in the run. A tradition of the firemens race in Barcelona is that four firemen from Barcelona (Bomberos de Barcelona) form a relay team and each member of the team runs 2.5 km of the 10k Cursa Bombers in full fire fighting gear which weighs almost 20 kg. They compete against other firemens teams to win the coveted Firemans team prize called "Premio Especial al Bombero Equipado."

The Nike Bombers race usually starts and finishes at the entrance to Parc de la Cuitadella on the crossing of Avinguda del Marquès de l'Argentera & Passeig de Picasso. Number shirts for Cursa Bombers registered runners can usually be collected by presenting registry slip at the Runners Fair on Poliesportiu Estació Nord near Cuitadella Park on Carrer de Napols, 42 from 10.30 to 20.30 during the days prior to the race date. There are normally two starting sessions. The first for fastest athletes of recognised standing and the second for all other public runners, who are organised under eight categories according to their personal records.

The 2010 Cursa Bombers was won by Kenyan athlete Josphat Kiprono Menjo in a time of 27 minutes 4 seconds, which was the second fastest time world-wide in 2010 and a new record for the Bombers 10k. The 2011 winner was Moroccan Ayad Lamdassem in time of 30 minutes 2 seconds. The Cursa Bombers 10k run in Barcelona is also one of the runs in the BCN athletic challenge with seven 10k runs called BCN 10K Challenge. The IAAF International Athletics Association has awarded the "Cursa dels Bombers" the Bronze Label as one of the best events on the international athletics calendar.