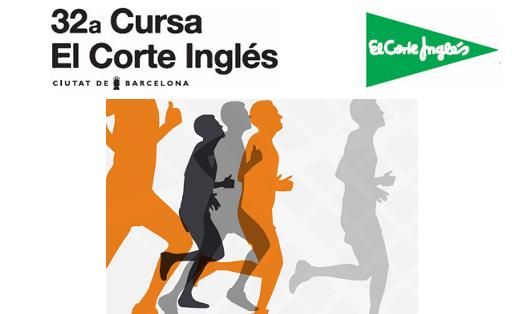 This "10 km" race, we have to be honest, in reallity it is a 11 km race, is one of the hightlights in Barcelona. Why? First of all it is for free! Yes, this race is sponsored by one of the biggest shopping center chains in Spain and you don't have to pay a subscription fee. Just registrate and you are in.

But what makes this race more special. When one of that many races in Barcelona could be something like a "people's race", than the Cursa d'El Corte Inglés" would be the one. Every year we have more participants. In 2013 we will have the 35. edition of this running competition. In 2012 they counted officially 60.000 people who took part in this race. This is the official number! A lot of people don't registrate for the race and waiting beside of the starting line and follow the route with all the other ones. So inofficially they say that they already hit the 70.000 mark (81.000 2015). And I have to say I believe them.

This crowd is crazy - big! When you don't start with the professionals and the extremly good amateurs from the first line, then you have to fight your way through thousands of other people. And don't think that they start the race in waves like you know from other marathons.

So you have to survive and run some slalom until you arrive at the bottom of the Montjuic Hill. Yep! The Montjuic Hill is part of this race and that makes this race so special. It is the only race where you run over the Montjuic and one loop through the Olympic Stadium of 1992. Yes, you have read it right. You will maybe feel the still remaining vibrations and atmosphere of the extremly successful Olympic Games. The Games which changes this city in modern history.

But here is one recommendation. First of all, put some hill training to your running work out. You will need it. Second, arrive at the stadium before the crowds arrive there - or you will have plenty of time to have a long look on the interior of this Olympic stadium. Unfortunately the old marathon gate does not exist anymore. You will enter the stadium through a bigger gate and leave it after nearly one loop through a much smaller gate. You can imagine what that will mean. A bg traffic jam!

So, this race is special and when I have time I will do it every year again. After I have finished the race at Placa de Catalunya I will return back to one of my favourite bars at Placa de la Universitat, "El Bar Estudiantil", and watch relaxed with some Tapas on my table all the other crazy people who took part in one of the biggest races in Europe - and maybe in the world. Like every year.