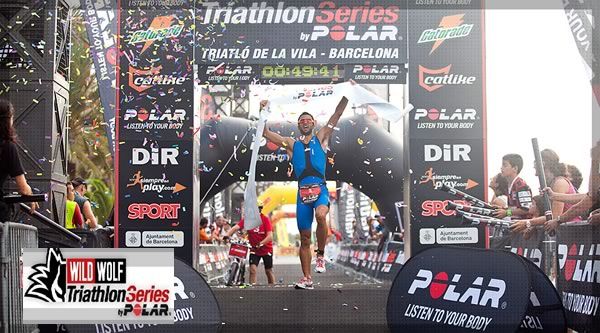 The WILD WOLF Series by Polar has 9 Sprint, Olympic and Aquathlon distance races in different Cities in Spain. For example in Madrid, San Sebastian, Palma de Mallorca and of course in Barcelona. Another fantastic option to discover the world of Triathlon.

Sunday morning at 7:59am. A few thousands slightly nervous people in thier swimsuits standing staring with their eyes on the sea - totally focused on that what will happen in a couple of seconds. This is the typically atmosphere just in front of a Triathlon competition. Sunrise, a couple of thousands athletes and like here in Barcelona a wonderful ambient with the beach and warm temperatures in July.

The WILD WOLF Series by POLAR is starting their race at the beach of Barceloneta with a bike transitions zone at Port Olympic. The bike route will be much faster because of less turns and you have to run along the beach with the direction to the Forum with the huge solar panel.

Have a look on their website for more information(Spanish/Catalan only]. This series is not so popular like the Garmin Barcelona Triathlon in October, but definitletly worth to give it a try.